All aboard!! Recently I went on a fantastic vacation with my girlfriends to Scottsdale, Arizona. While our home base was Scottsdale we ventured up to Williams, Arizona to go to the Grand Canyon Railway and Hotel. My three girlfriends and I go on an adventure once a year, the last two years we went to Scottsdale. 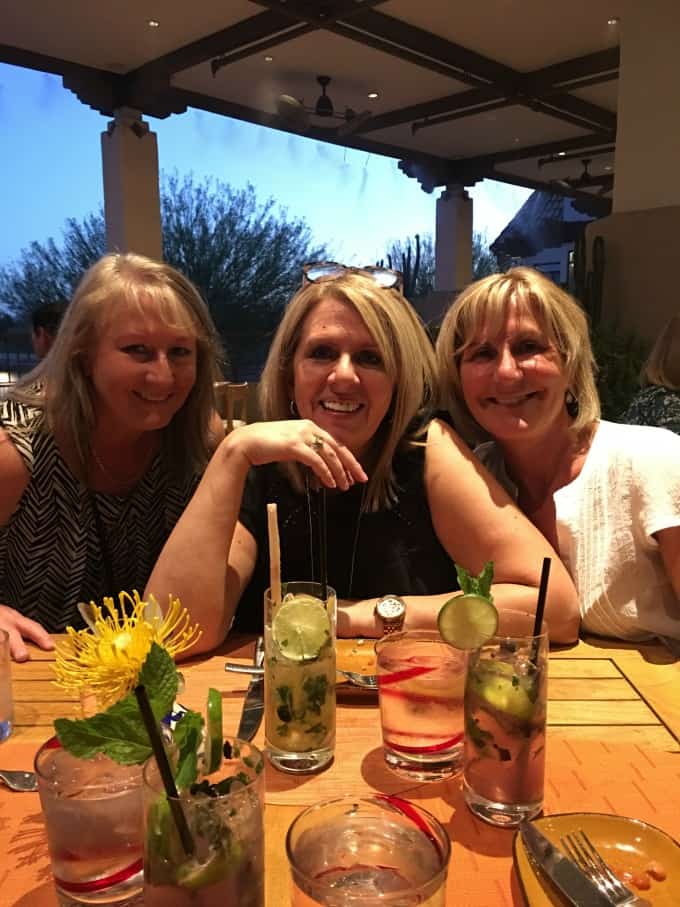 From left to right is Janet, Karen and Trisha. Life long friends that are more like sisters now that the years have gone by. I cherish my time away with them. 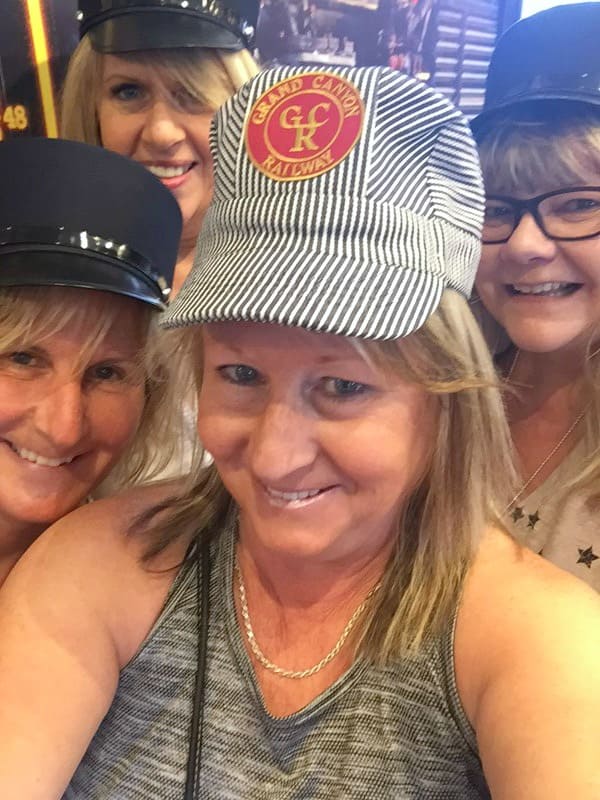 There is lots to see even in the little town of Williams but we were very excited to board the train and take the just over 2 hour journey to the Grand Canyon. 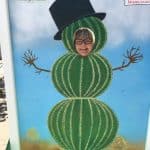 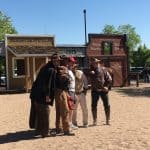 There were fun things to do along the way to getting on the train including a great store to poke around in and a cowboy show for about 15 min. prior to boarding. 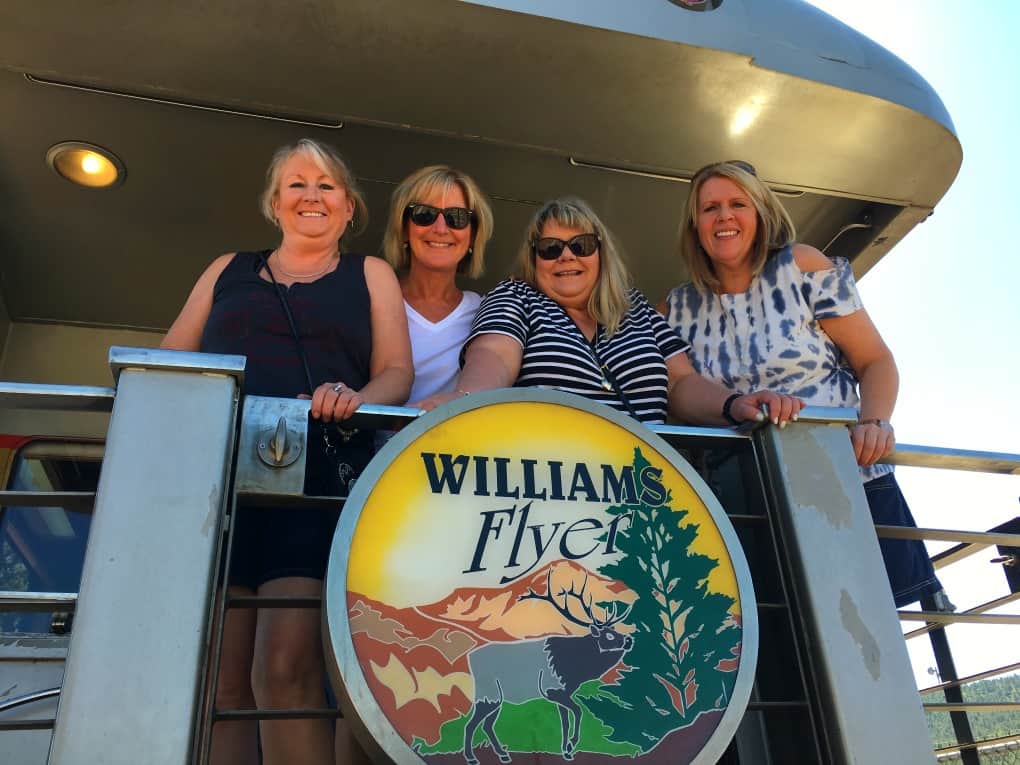 We did a package of a two night stay at the Grand Canyon Railway and Hotel which included our meals, train trip and accommodations. Plus a $20 voucher to spend at the store for souvenirs.

There are six classes of transportation on the train from the Pullman’s Class (warning: no airconditiong), Coach Class, First Class, Observation Dome, Luxury Dome, and Luxury Parlor. We were there for fun so it was the Luxury Parlor Class for us. The tickets cost from $67 to $219 but there are also packages including your stay and meals.

Children are not permitted here as it has a private cash bar. The drinks started flowing right away with a round of Poinsettias, which is cranberry juice and prosecco. They were fun to start with for sure. Besides the buffet breakfast we already had they also supplied muffins, pastries, yogurt and fruit. 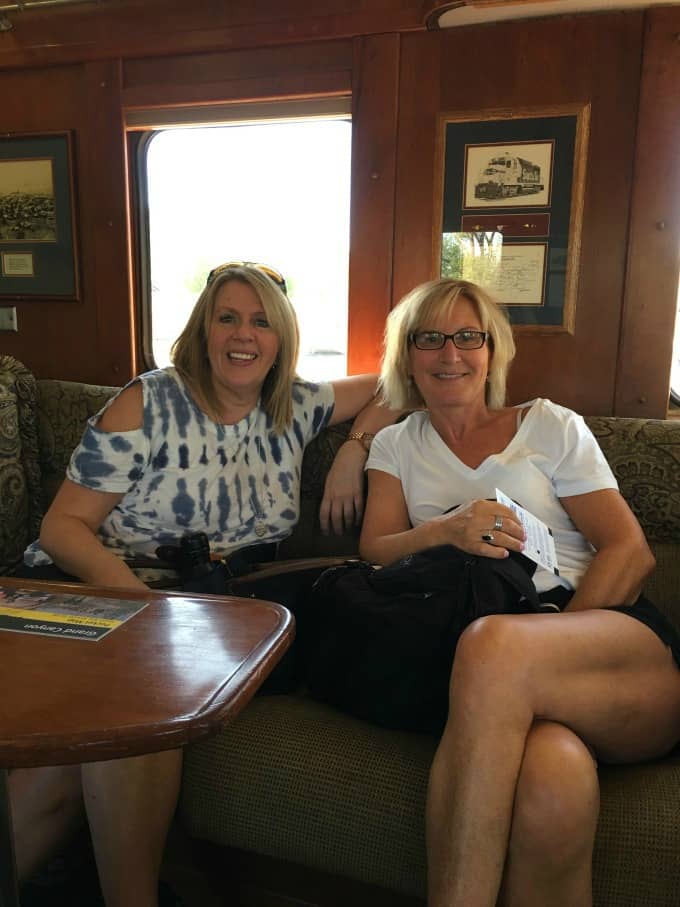 The interior of the train was very comfortable with large and small bench seating and tables. Even the washroom was lovely and roomy for a train. 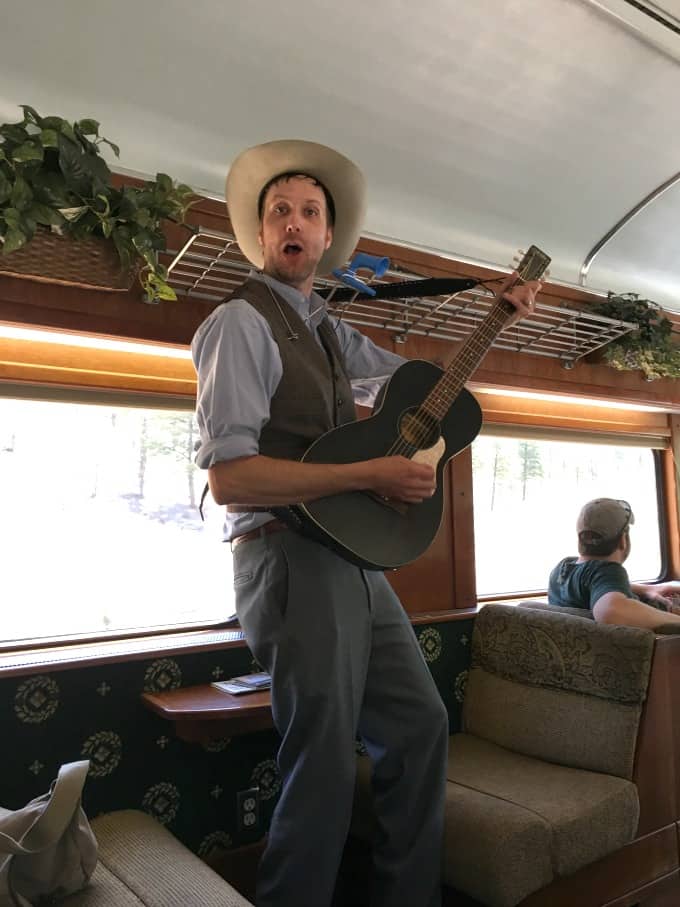 On our way there and back there was entertainment to keep us amused also! Johnny Cash seemed to be the music of choice along with some great laughs!! 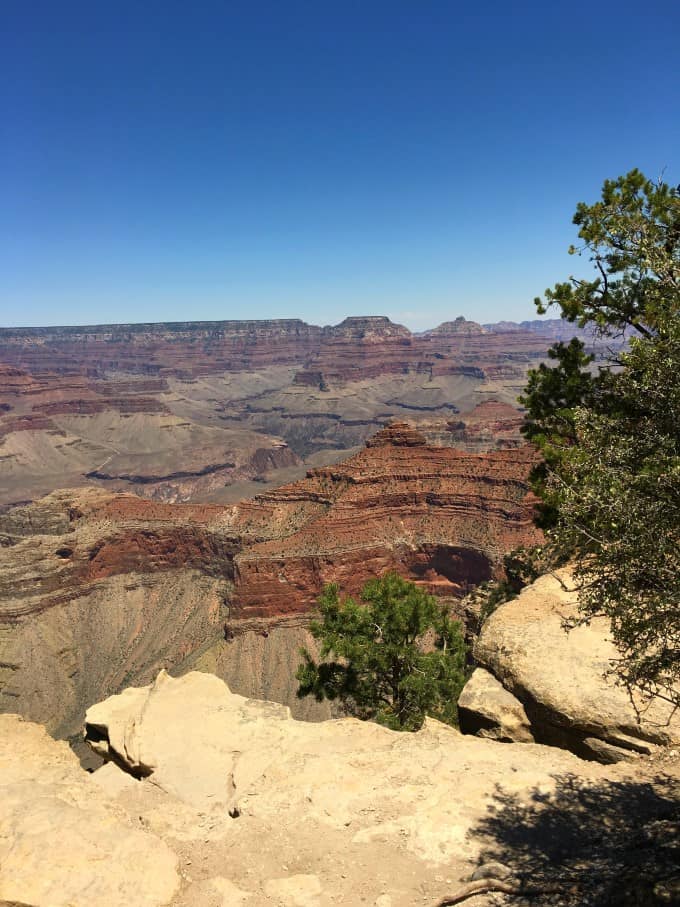 After a delicious buffet lunch we were off to see the main attraction, the Grand Canyon by bus. This is an unbelievable site and one that makes me weak in the knees. It is 277 miles long and 18 miles at the widest point.

Our view was from the South Rim which is open all year round and is the most popular of spots to hit. 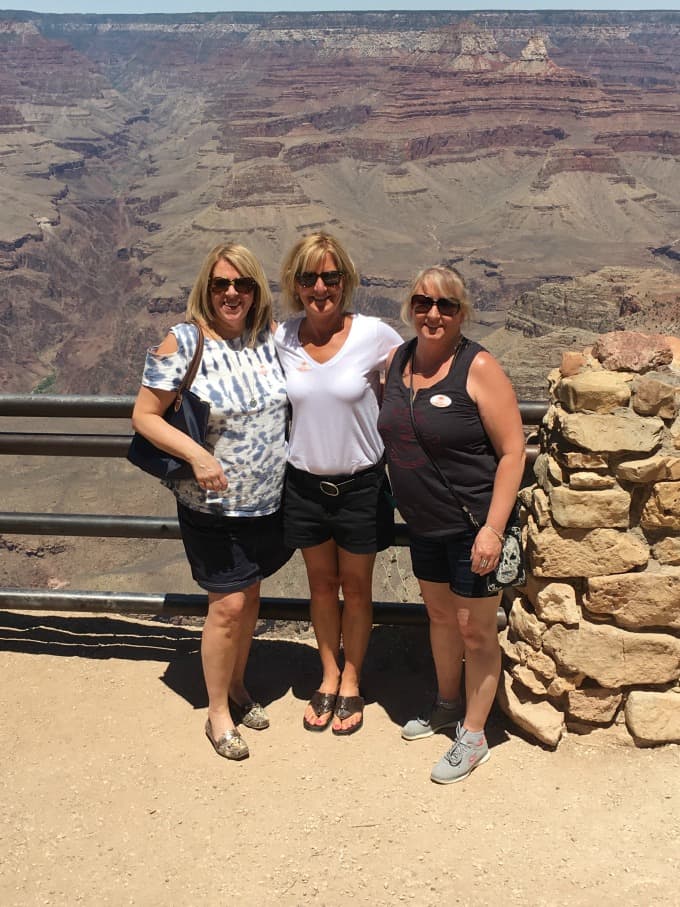 Here are the gals again and they so enjoyed there time here at this awestruck natural wonder. We were taken to three different spots on the tour to peer over the side. 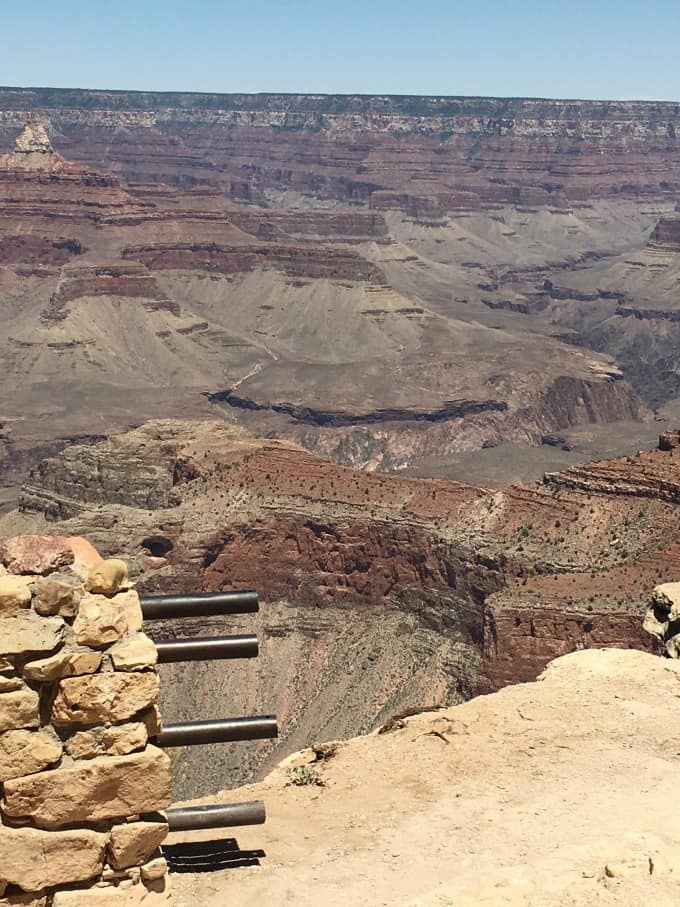 Some areas were easier for me than others. I have to admit I have a fear of heights that was fully realized when I went up the Eiffel Tower a few years back. I was able to make it to the edge in most locations though.  Something like this freaked me out, where did the rails go!! Aaaah! 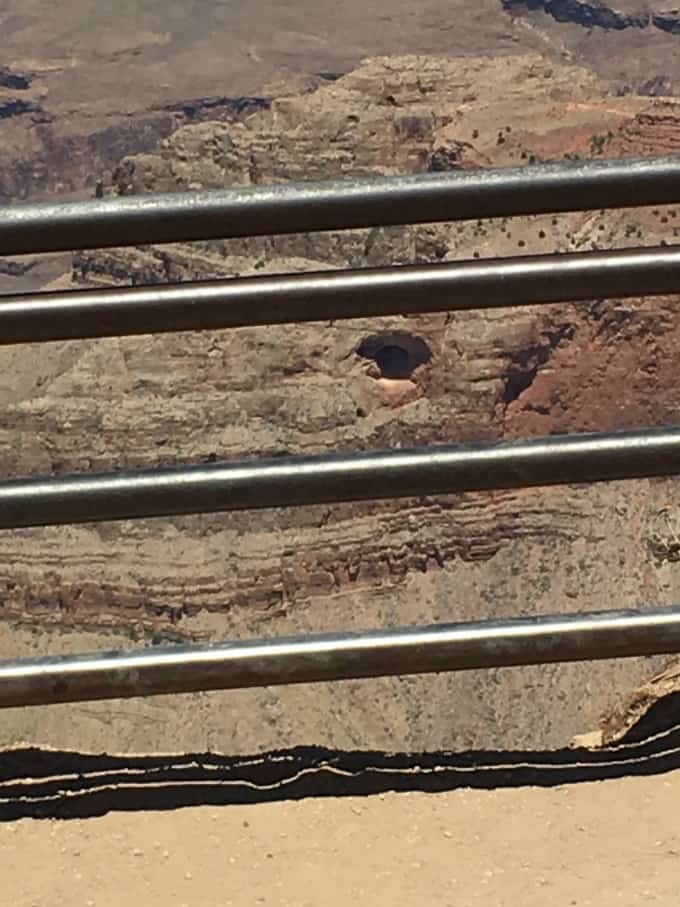 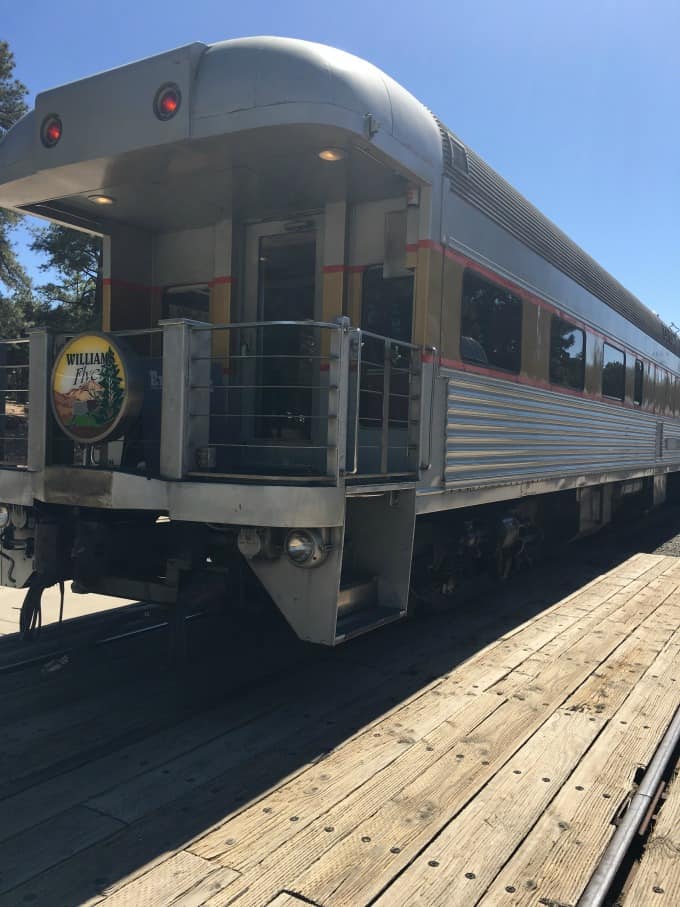 And here is our slick ride. You can stand on the back of the train while it is going and catch the wind and check out the view even more intently!

The train was originally built in the late 1800’s to transport ore. By 1901 it was used to transport the public to the Grand Canyon. With the advent of cars though the train went out of fashion and saw its last passengers in 1968.

The Grand Canyon Railway went under an extensive restoration and reopened in 1989. The train takes you from Williams to the South Rim of the Grand Canyon. 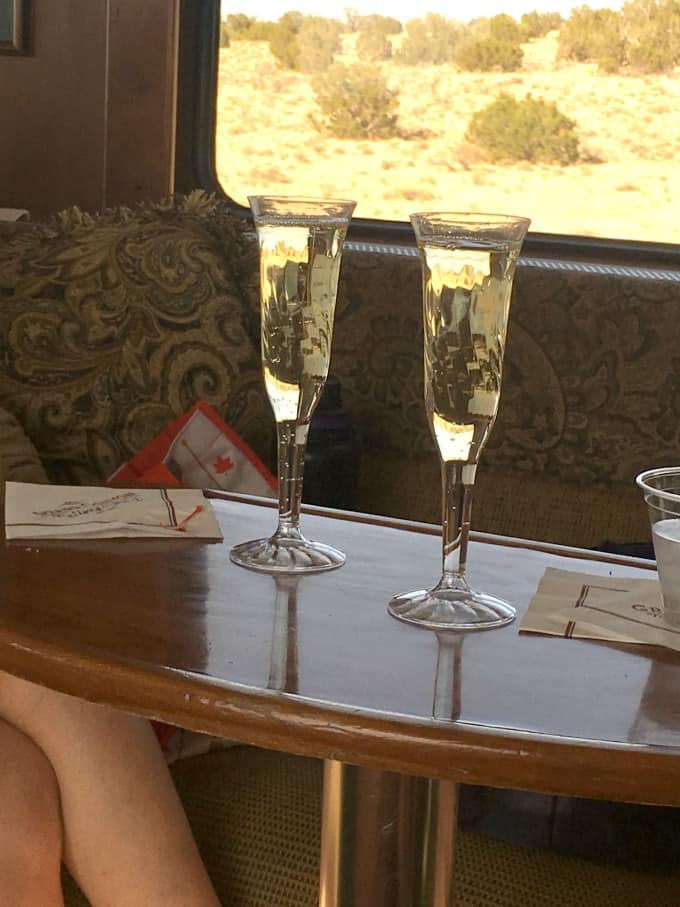 There was free bubbly on the return ride home and some lovely meats, cheese, crackers, chocolate dipped strawberries and more. It is a full day as you leave at 9:30 am and return at 5:45 pm. 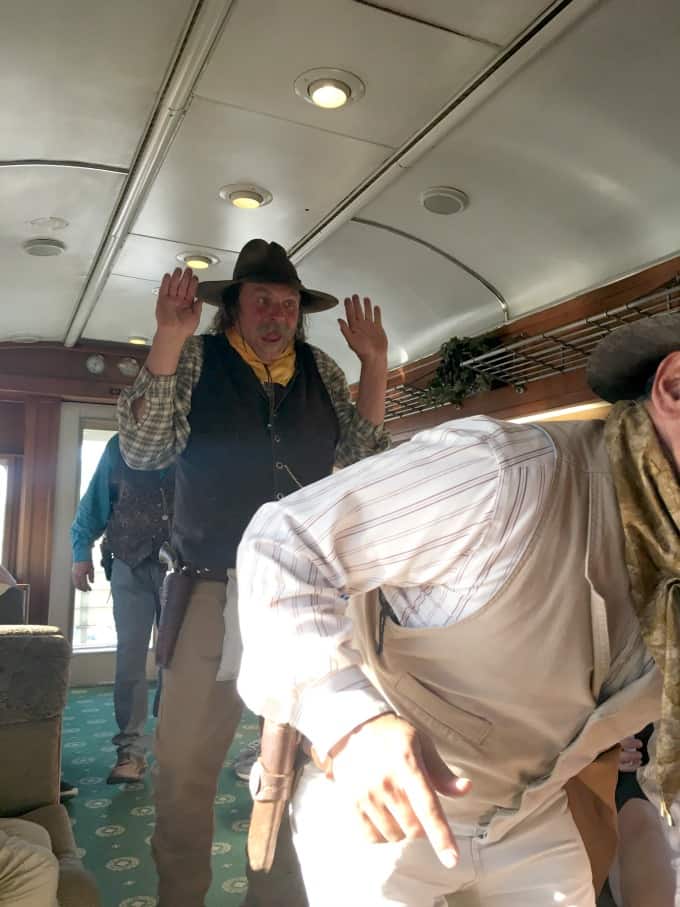 While we were sitting back and relaxing our train was robbed by the very same cowboys that had entertained us at the beginning of the day. They pulled up on horseback and stopped the train!! Luckily the marshal came in and cleared those bad boys out. 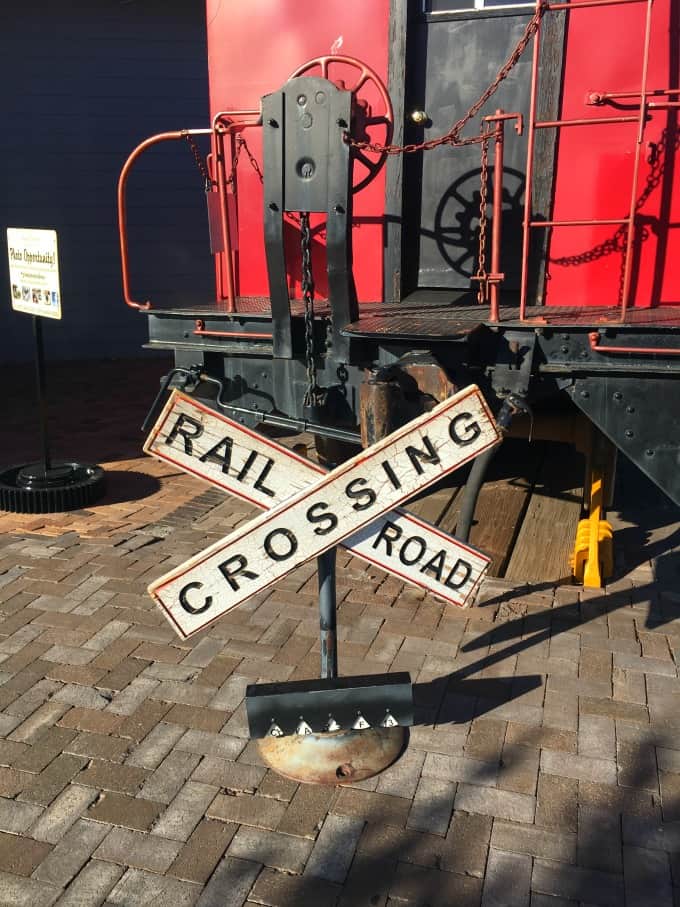 All in all this trip was amazing and it was completely enjoyed by us all. I highly recommend it. The food at the buffet overall is decent at the hotel and the hotel rooms are nicely appointed, newly renovated and clean.