These tasty Pudding Pops are the super simple treat you need to cool off on a hot summer day. Not only are they melt-in-your-mouth delicious ice pop, but they also bring back all the nostalgia of childhood summers. It’s a fun and easy recipe to get the kids involved with too!

The Jell O Pudding Pops of my childhood were discontinued in the 1990s. Luckily, it’s an easy recipe to duplicate in the home kitchen. Best of all, when you make pudding pops at home, you can make them exactly how you like them. You can try our Cherry Cheesecake Popsicles too for another cooling treat on a hot day!! 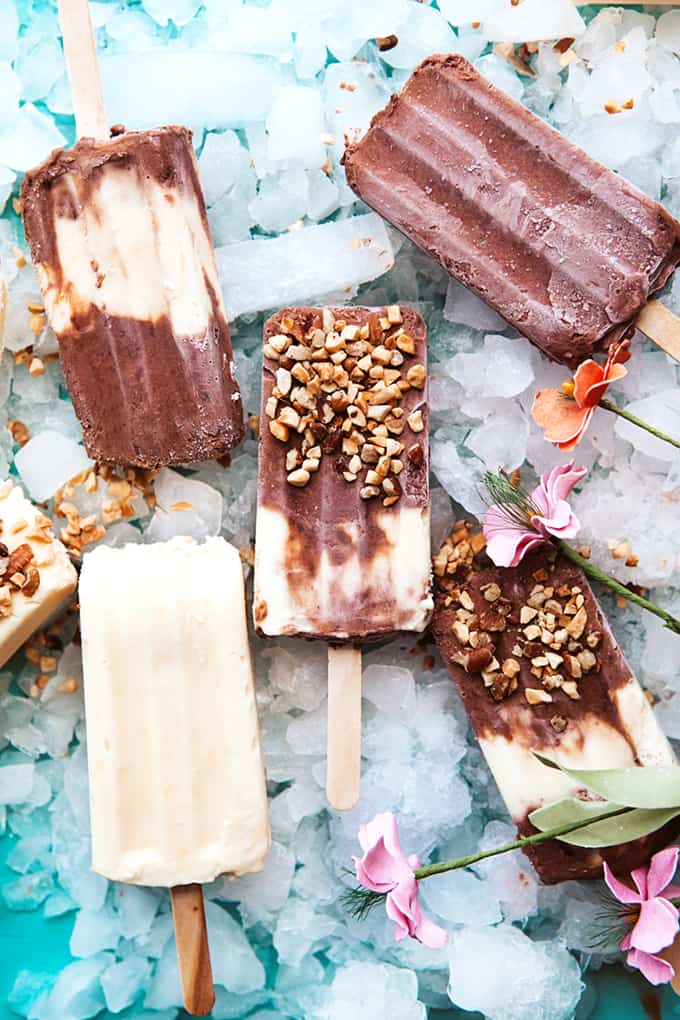 Hello again! I’m Allison from Some the Wiser. In my little corner of the world right now it’s nearly as hot as the face of the sun. It’s so hot I’m prone to extreme exaggeration. 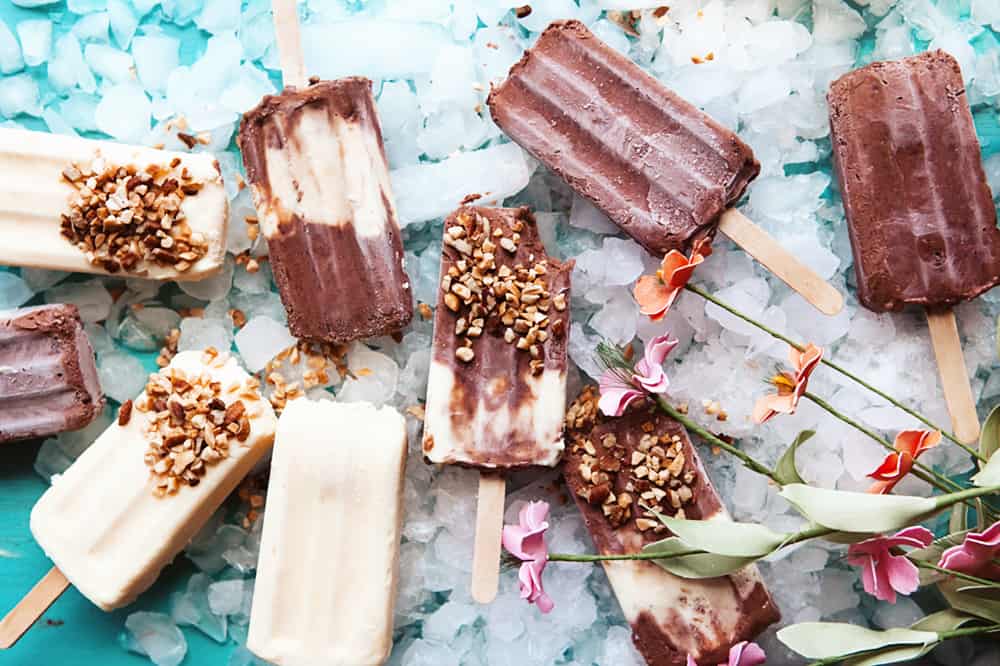 How to Make Jello Pudding Pops

While you can make pudding pops entirely from scratch (I’ll talk more about that below), there are a couple of really easy shortcuts. The first is to buy boxes of Jell O Instant Pudding. Just add milk and whisk and voila! Using instant pudding also makes the flavor of the pudding pops more like the original popsicle brand.

To make the homemade pops even more like the old favorites, you can use another an easy shortcut and add in a couple of scoops of room temperature Cool Whip. This makes them extra creamy so they really do melt in your mouth in the most delicious way possible.

Once you have these basic ingredients, all you need are popsicle molds and pop sticks. I used this mold, and the silicone has really stood up well even after many batches of popsicles. However, you can also just use small paper cups if you don’t want to invest in a pop mold.

If you have problems getting the popsicle out of the mold place the molds under warm running water for 15 sec to release the pops. 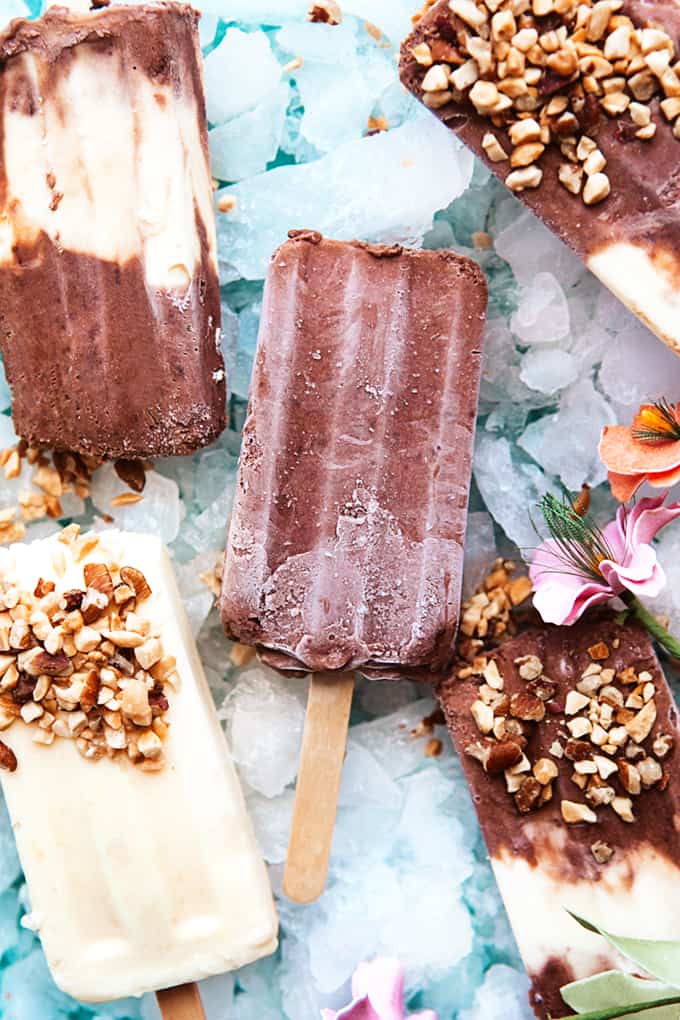 Can you Freeze Pudding?

You can freeze pudding! In fact, with just a few extra tweaks, that’s basically all a pudding pop is – frozen pudding!

To make it easier to get the pudding into the popsicle molds, it’s best to pour the pudding in before it has completely set and while it is still runny.

You can use any instant pudding flavors you like, but the most popular are definitely Chocolate Pudding and Vanilla Pudding. When I make pudding pops, I like to make a batch of both types of pudding and then mix some of them for a marbled chocolate vanilla effect. I do this by alternately pouring in a little chocolate pudding and then a little vanilla pudding until the mold is full.

I also like to dress them up a little bit – this makes them an extra fun treat when entertaining too. Some good toppings are:

To add toppings to your popsicles, remove them from the molds and let them sit at room temperature for 3 to 5 minutes, or until they just barely begin to soften. Press the toppings onto them, then place them on a parchment-lined pan and return them to the freezer for another 20 or 30 minutes until they are completely hardened. 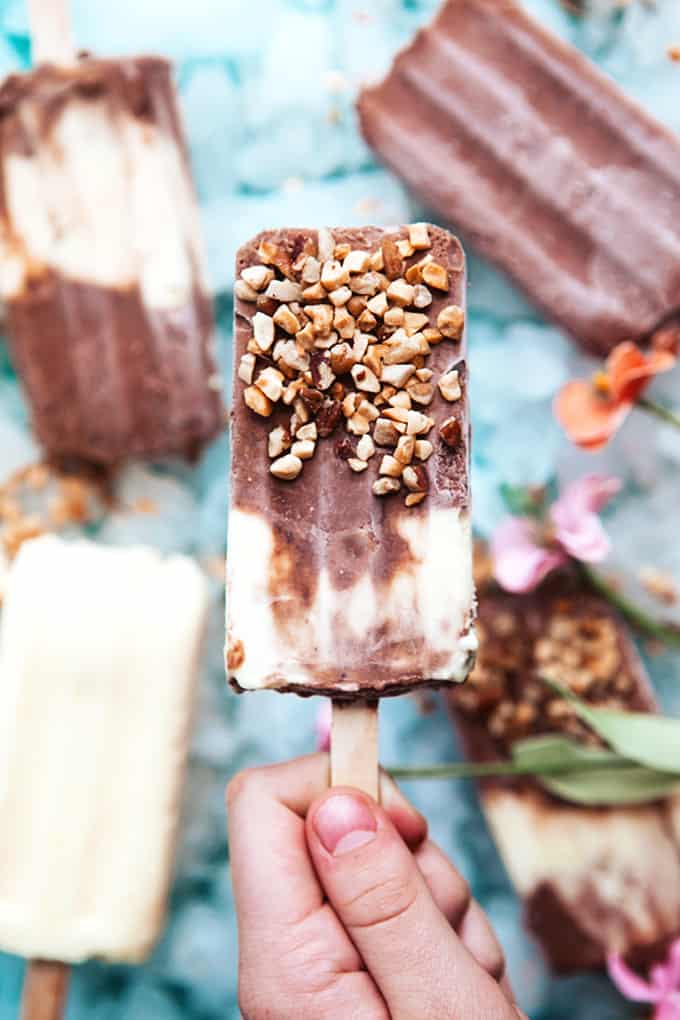 How Do You Make Pudding Pops From Scratch?

While it’s perfectly fine to take the easy shortcut and use instant pudding, sometimes you’re in the mood for a treat made from scratch. When that’s the case, you can whip up a batch of your favorite stovetop pudding to start with.

When I make pudding pops from scratch, I like to use this recipe for Dark Chocolate Pudding. Once you’ve made the pudding, you can proceed with the recipe below, just skip the milk, and replace the Cool Whip with Whipped Cream instead. They’ll taste a little richer than the instant pudding pops, but they have a nice, grown-up flavor to them. 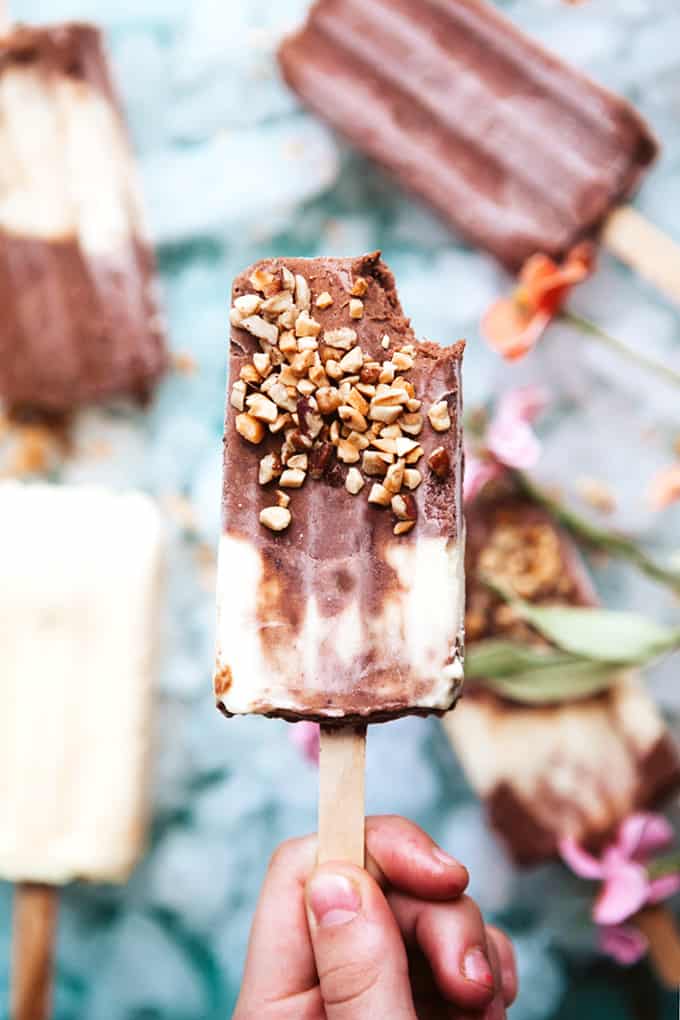 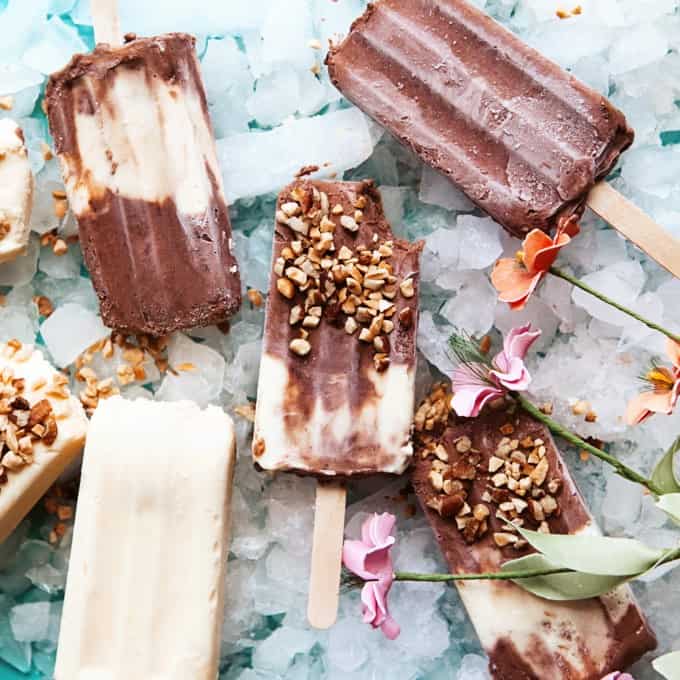 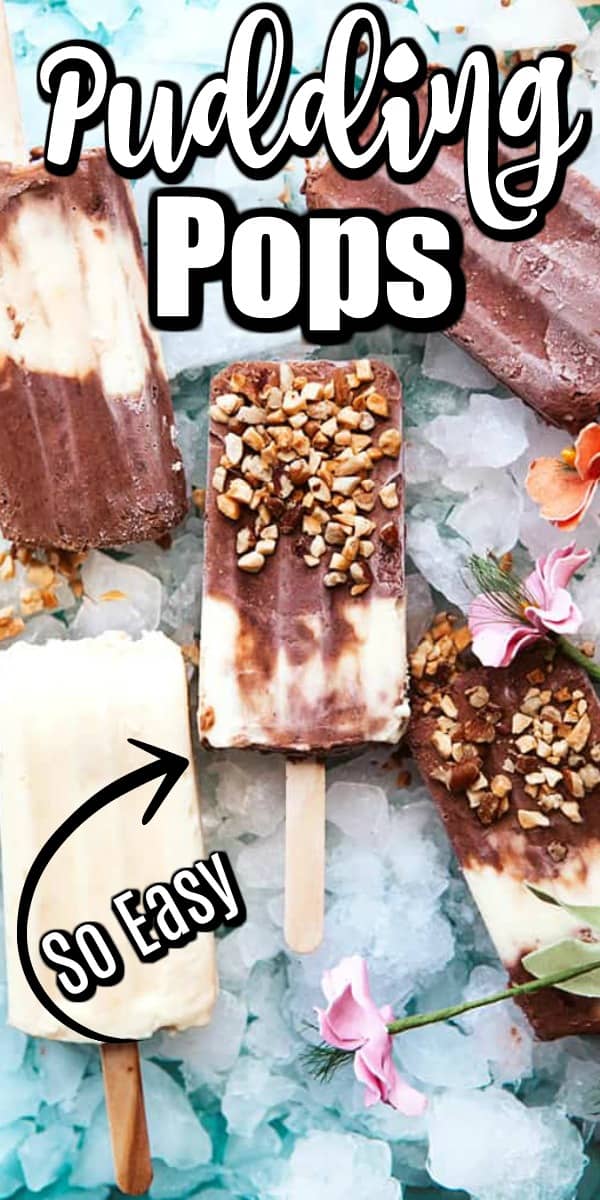 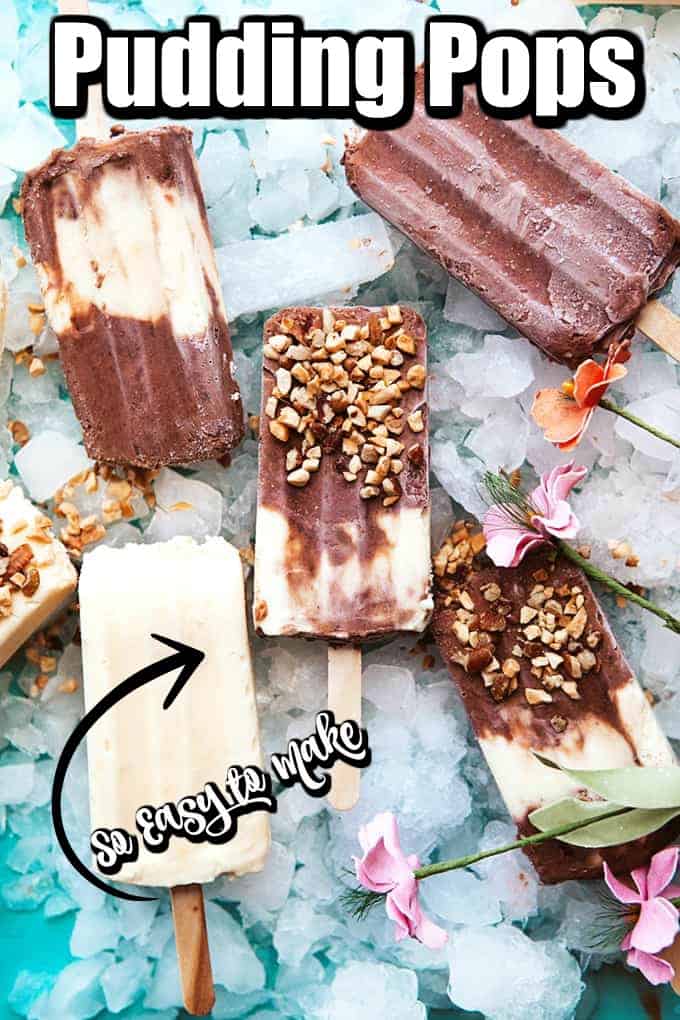 The number of pudding pops you get will vary based on the size of your mold and will also alter the nutritional information. We did base ours on making 16 for the recipe.