We made these Asiago Stuffed Arancini with a Truffle Cream Sauce after I did a write up on Borgo Trattoria the other day saying that we had their delicious Arancini. Well I went about to make my own and they are absolutely out of this world. I wanted some big flavors but in a subtle way. Instead of mozzarella I used asiago, which I love. Instead of just a cream sauce I wanted a truffle oil cream sauce but I didn’t want either of these flavors to overwhelm.

I feel that I succeeded with an outstanding recipe and my family agreed. We gobbled down these delicate balls with enthusiasm. They make an awesome appetizer that would blow anyone away. The balls can be made ahead of time and then refrigerated and fried just before serving.This recipe is not for the faint of heart. They are a treat!! They also take some time to pull off but in the end they are so worthy of your efforts!

Try them for a special occasion you won’t be disappointed. 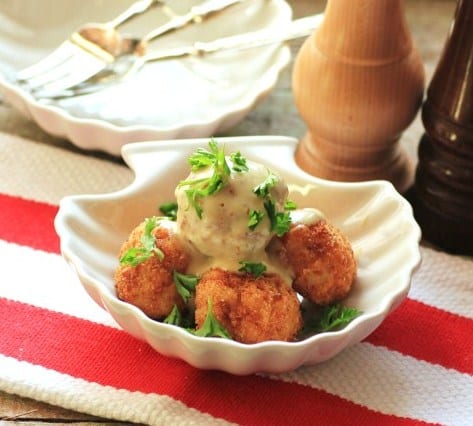