Sex In A Pan

Have you heard of this dessert before, Sex in a Pan? It has been around for a long time. It has a yummy nutty cookie bottom followed by layers of cream cheese and pudding mixes and topped with Cool Whip. Pretty much can’t go wrong with that!!!

This is one of those popular recipes that you will want in your easy dessert section. A dessert that feeds a crowd, one that everyone loves, easily portable and casual for any family or friend get together.

All of the ingredients are easily layered up in a 9×13″ pan. This makes for a quick make-ahead dessert that is great for parties and gatherings. 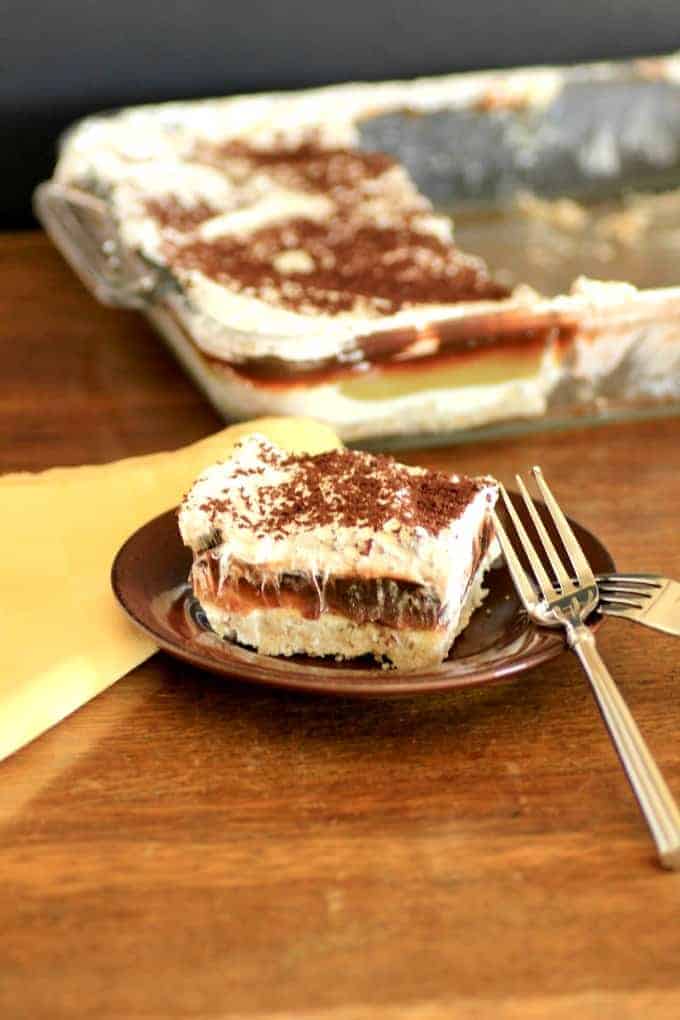 There are so many theories as to how the Sex in a Pan dessert got its name. There is the obvious one – someone liked it so much they declared “it’s like sex in a pan” and the name stuck. That’s possible but I’m not so sure about that one.

One of the most common theories is that it came from the fact that when you include the chocolate shavings on top, there are six layers in this layered dessert – so six in a pan – and over the years it morphed into sex in a pan.

That’s the PG version of the story I’m going to go with if anyone asks! I’ve also seen it called the “Robert Redford” dessert and “Better-Than-Sex” – both of which would probably require more explanation than Sex in a Pan dessert already does! 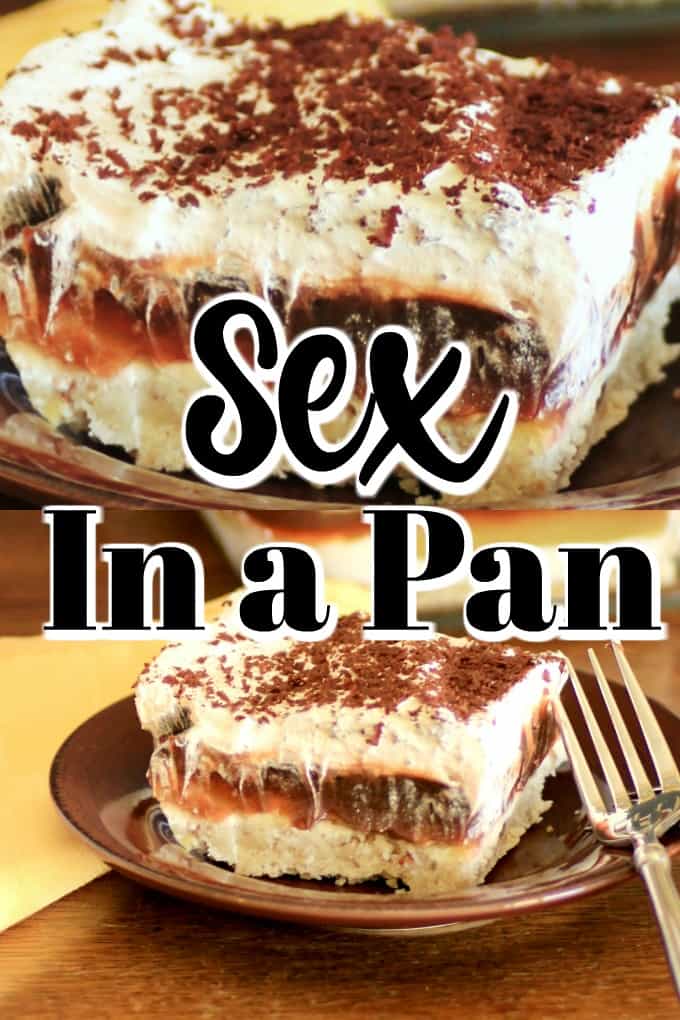 I made this for the kids mainly, as it keeps well in the fridge for many days. They thought the name was so funny!! I should have maybe called it something else because that is all I heard about for days, along with giggles!!

The kids staying with us were Zack 11 and Halen 12. Something they will remember from the summer of 2013!! Great memories plus a great dessert that we could pull out of the fridge for a snack or dessert many times while they were here.

Try this very easy and delicious recipe next time you have a house full, they will love it!! ENJOY!!

Ingredients for Sex in a Pan

How to Make Sex in a Pan? 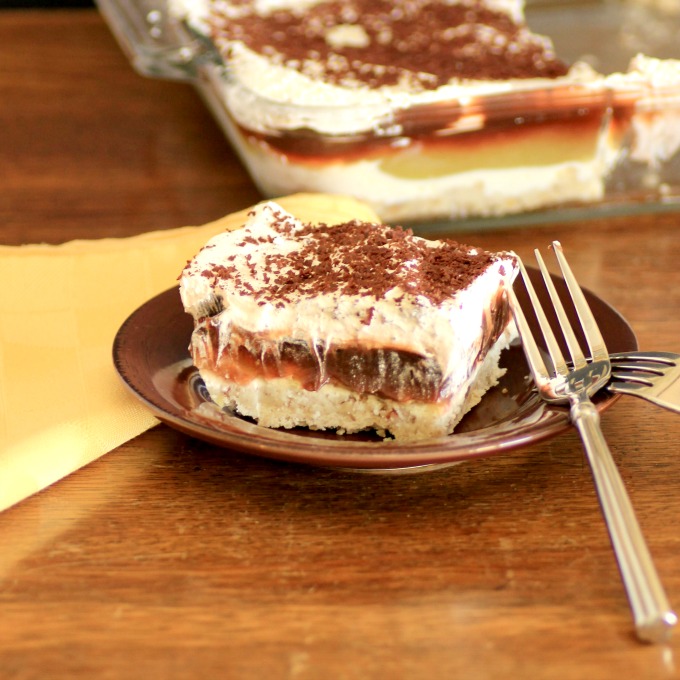 To make Sex in a Pan, you’ll need a baking dish that can go from hot to cold – so a glass baking dish works well.

First make the crust with the pecans, flour, and butter mixed together and bake it. Then the next layer is made using Cool Whip, cream cheese, and powdered sugar.

Spread the cream cheese mixture over the crust. Then mix the puddings separately with cold milk and layer first the vanilla pudding, then spread the chocolate pudding on top of the vanilla layer.

Finally spread the remaining Cool Whip on top of the chocolate pudding, add the grated chocolate, chill and serve!

Can You Freeze Sex in a Pan? 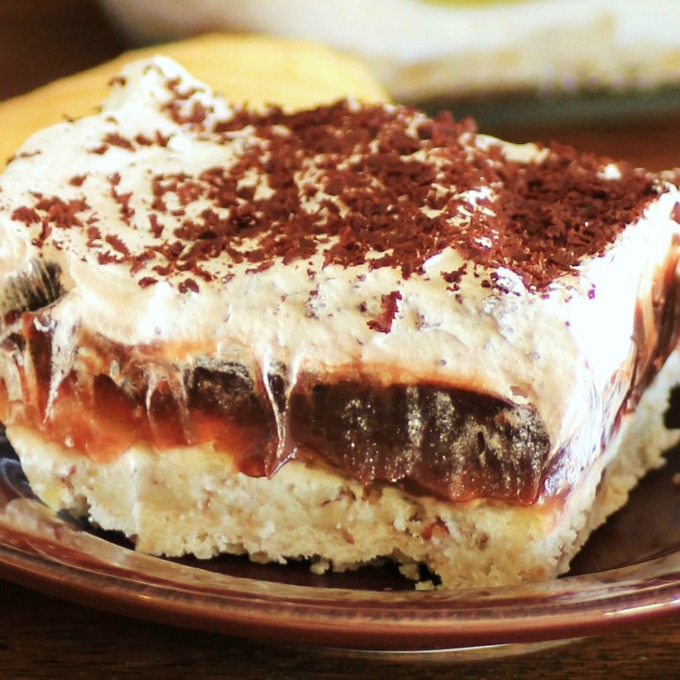 To be honest, it never lasts long enough around here that I’ve tried to freeze it, but if your family isn’t as big a fan of it as mine is, yes you can freeze it.

You’ll need to find a cover that fits your baking dish tightly. Just pop the whole thing in the freezer and when you want some you can cut off what you need and let it thaw while leaving the rest in the freezer.

If you want to wrap with plastic wrap you can freeze it ahead of time uncovered and when it is solid then it is easier to wrap and not lose half the topping as it won’t stick as easily to the plastic wrap. I then like putting a layer of aluminum foil on to help seal it better. 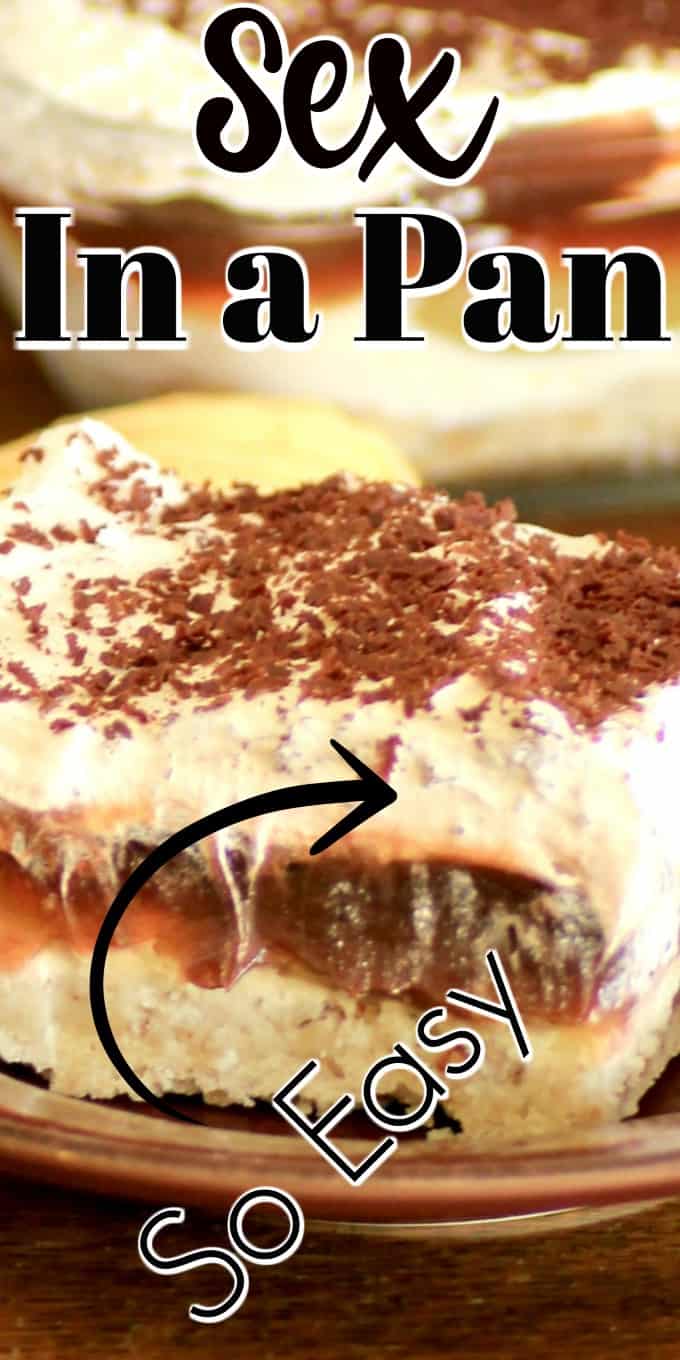 Sex in a Pan Recipe