The holidays are almost upon us and many of you have taken on the rather daunting task of hosting a big family dinner this year. This is where How to Cook a Ham 101 will come in so handy.

While some people choose to serve different proteins, like roast beef, chicken or turkey over a variety of different holidays, ham is a delicious holiday meal staple for many families. Not only is ham perfect for the upcoming holiday dinners, but it’s also a fantastic main for any time of the year.

When it comes time to cook up a whole ham, you may be wondering how to choose the right one, how to prepare and cook it, and what to do with the leftovers.

There are many questions associated when it comes to how to cook a ham, but the answers aren’t as daunting as you may think. 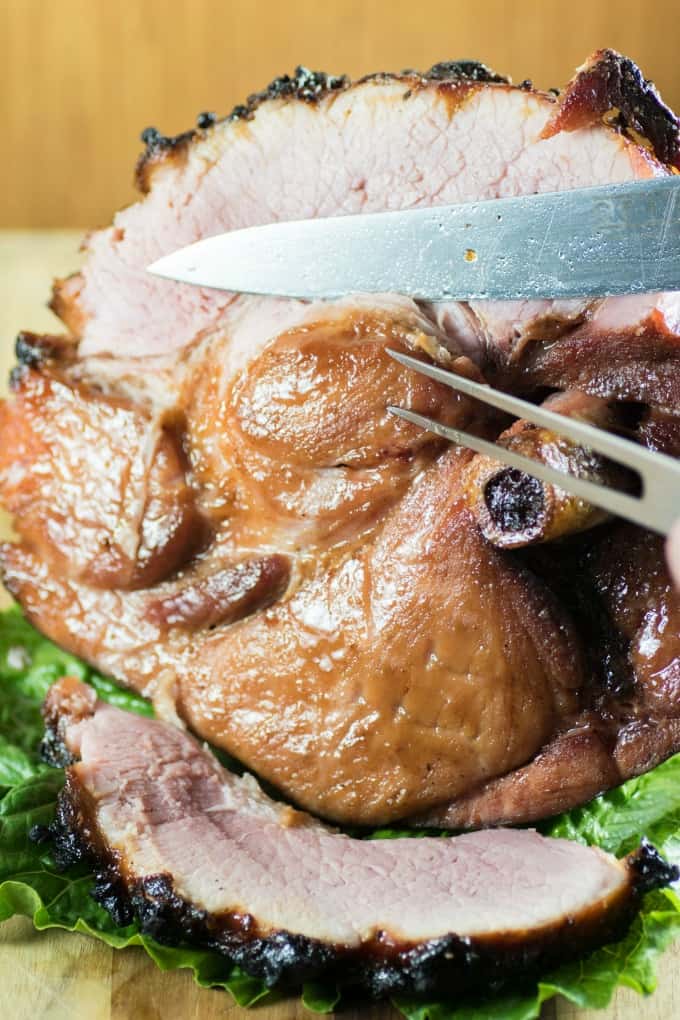 While the shank looks pretty as a picture and shaped a little like a funnel it retains its portion of the femur, plus a shank bone which makes it more difficult to carve. It’s very flavorful but it does tend to be a little tougher than the butt half.

The butt end (the upper portion of the leg) is leaner and offers a little extra meat. It is relatively easier to carve with only having the one femur bone. 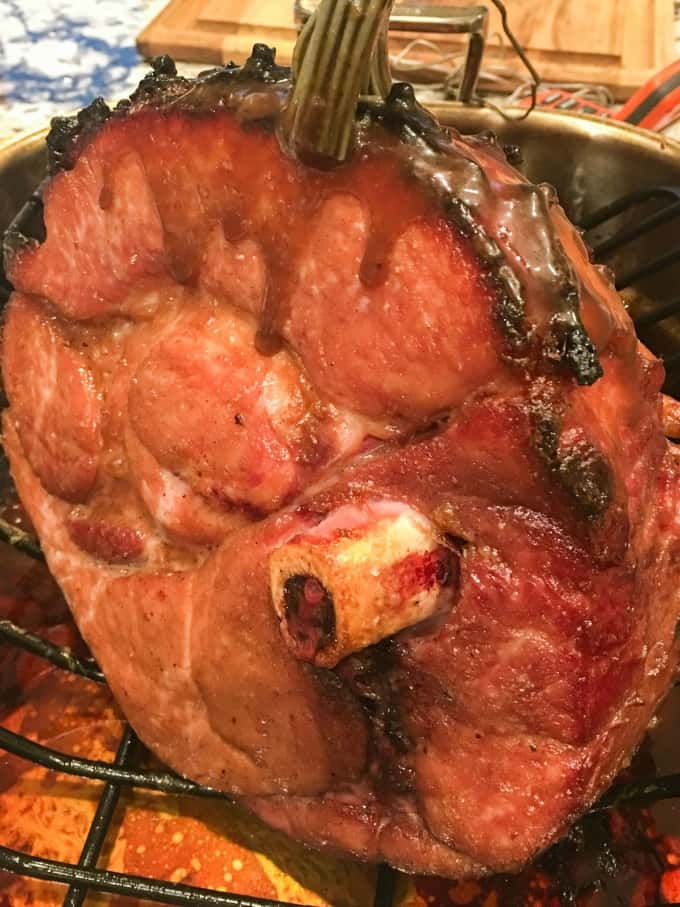 The bone in a bone-in ham gives the meat a more pronounced flavour and texture, and as an added bonus the leftover ham bone is perfect for making stews and soups. A boneless ham is far more convenient when it comes to presentation. With this kind of ham the bone is removed and the ham is pressed into an oval shape. This makes it the easiest cut of ham to carve.

A spiral cut ham takes all the fuss out of the bone-in vs boneless debate as it still got the bone inside to add to the flavour profile, but it is also pre-cut into thin slices that just need to be carved away from the bone. This is perfect for ham sandwich leftovers the next day, as the thick slices pull away from the bone rather easily. 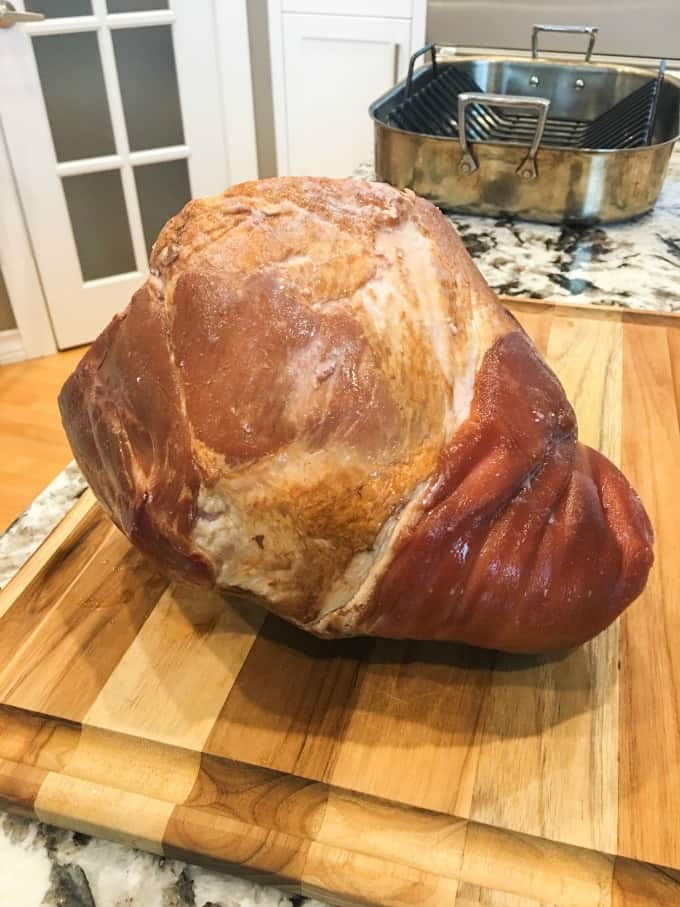 How Much Ham to Buy

When purchasing a ham, the size you need greatly depends on the number of servings you require.

When serving a boneless ham, figure in ¼ to 1/3 of a pound for each person in attendance. For 4 people you will require approximately 1.3 pounds, while for 12 you would need at least 4 pounds.

When serving a bone-in ham you will want to add the weight of the bone into your calculations. For example, for 4 people you will probably need a 2-pound bone-in ham and for 12 you would need approximately 6 pounds of ham.

How to Cook a Ham

How to Cook a Spiral Ham

Preheat your oven to 275 Degrees Fahrenheit and remove all packaging materials from the ham. Using a baking dish or roasting pan, place your ham face down and cover tightly with a lid or foil and bake in the oven for approximately 12-15 minutes per pound of ham. If glazing, apply glaze when there is 30 minutes left of cooking time and continue to cook uncovered. 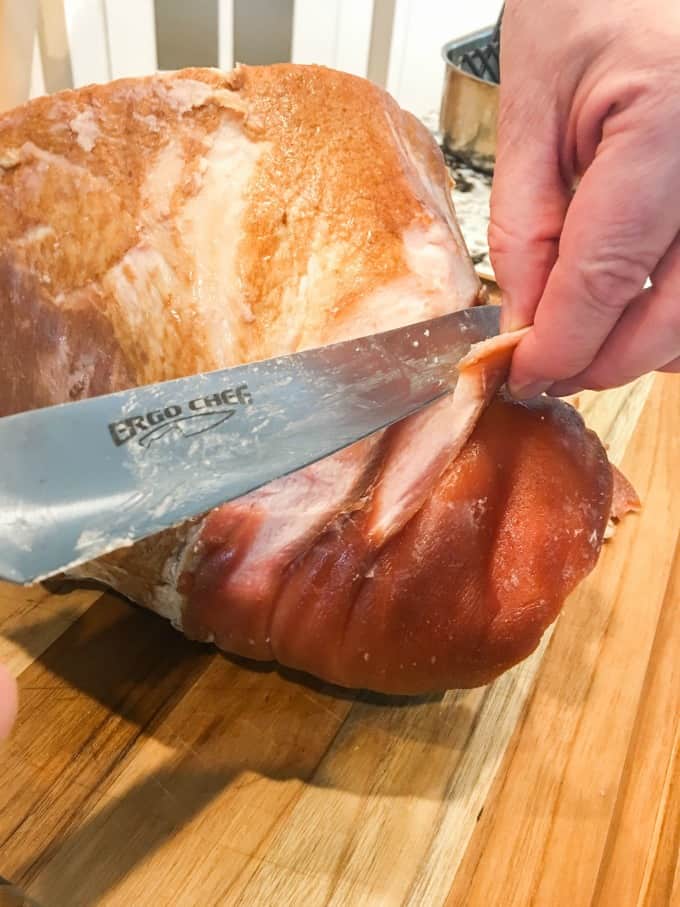 How do I Cook a Precooked Ham?

If you are starting with a fully cooked ham, preheat your oven to 325 degrees Fahrenheit. Remove any excess fat and skin. 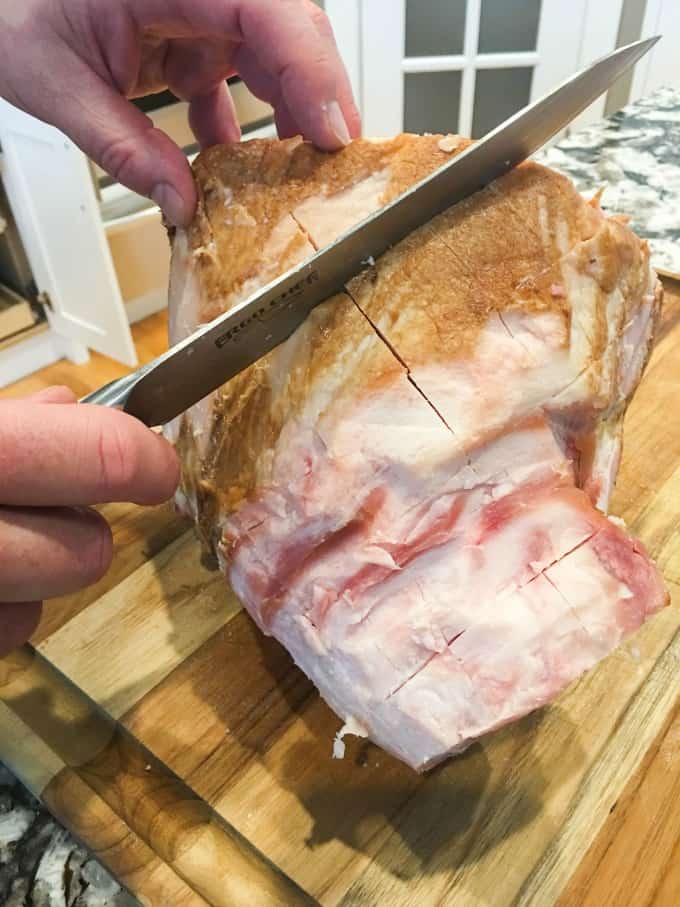 Then score your ham in diamond shapes. This allows the glaze to penetrate the meat more. 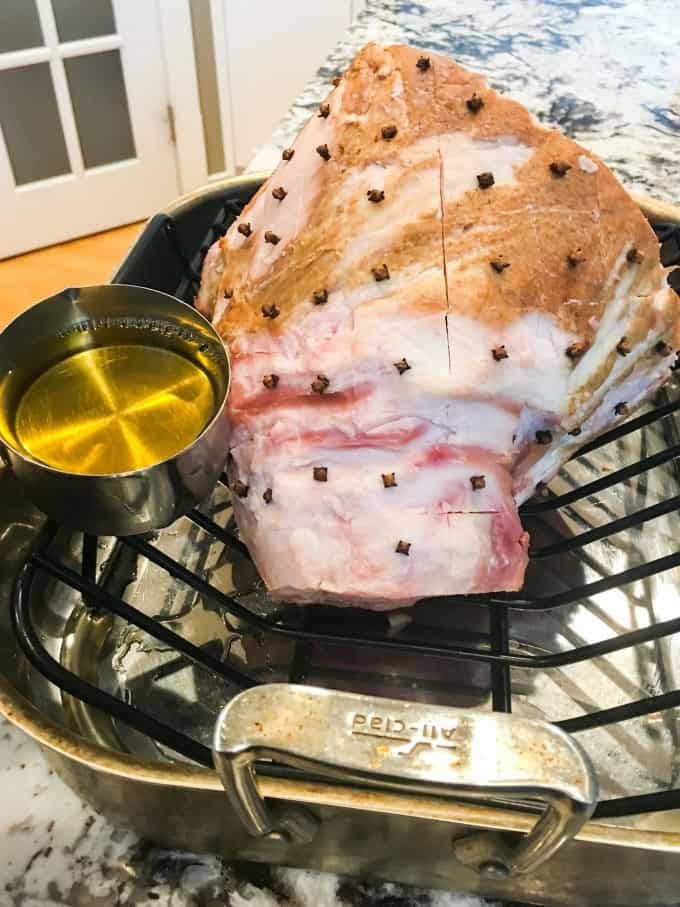 Once scored add in a clove to each diamond. Fill the pan with apple juice and water. You will want to keep an eye on this and replenish as needs be. 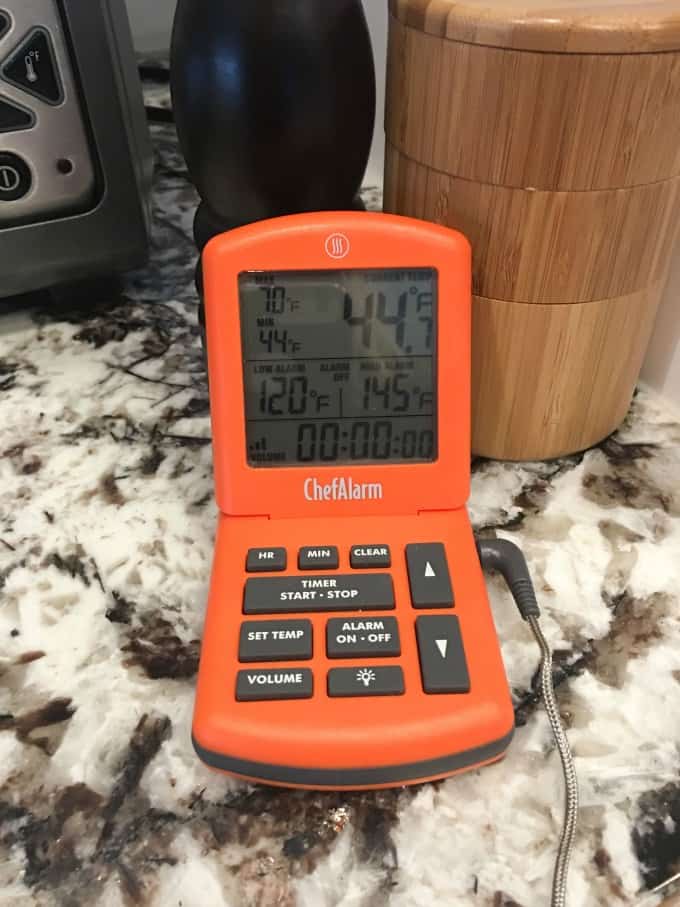 Inserts a ChefAlarm thermometer (affiliate link) into the ham in the middle. This will allow you to cook the ham to the perfect temperature so that it is not dried out.  Then cover it in foil and place it into the oven, this will keep the ham juicy and moist. Remember to keep adding in the liquid, this also helps. 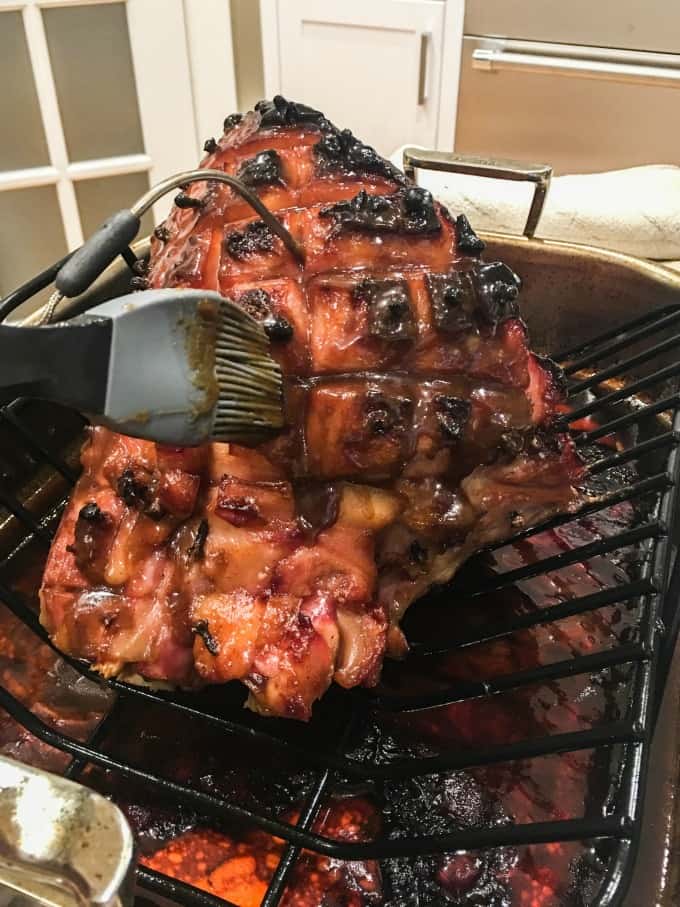 Cook the ham for approximately 15 minutes per pound of meat until it reaches 120F. Turn the oven up to 425F. Start at this point to glaze and do so every 15 minutes.

My recipe for the glaze is truly amazing. You may want to double it and serve it as a sauce. Those crispy bits on the outside were like little pieces of heaven!! 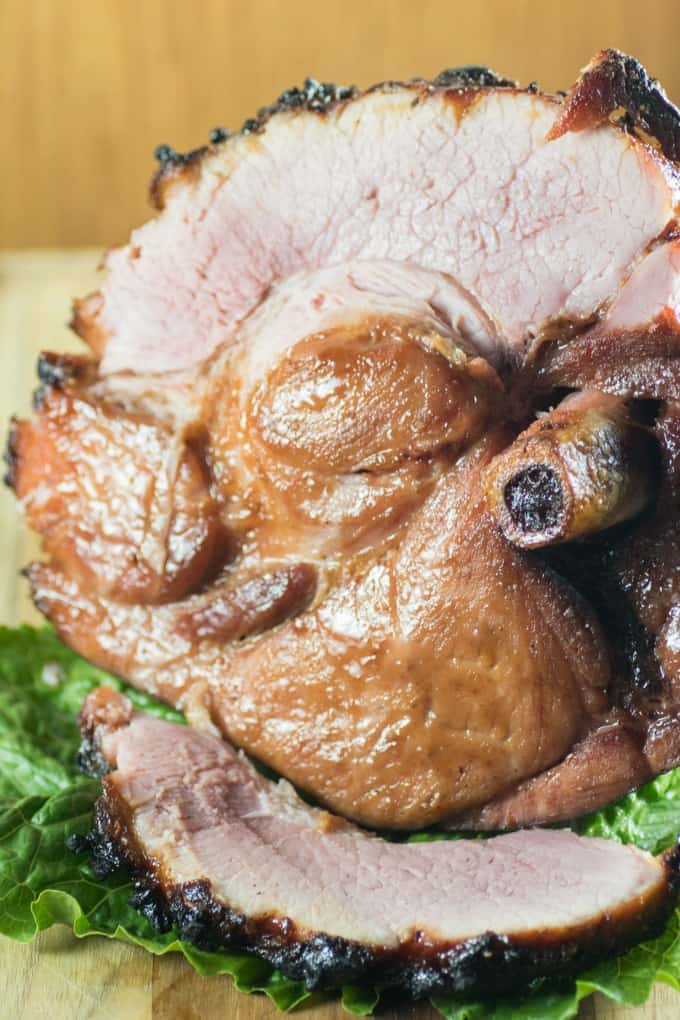 Ham makes a delicious centerpiece to any holiday meal leaving you with yummy leftovers. We have a great roundup here with other ham recipes and ones for leftovers too or try our easy Ham and Pea Pasta!

Just make sure you are choosing the ham that best suits your needs when it comes to cut and size. 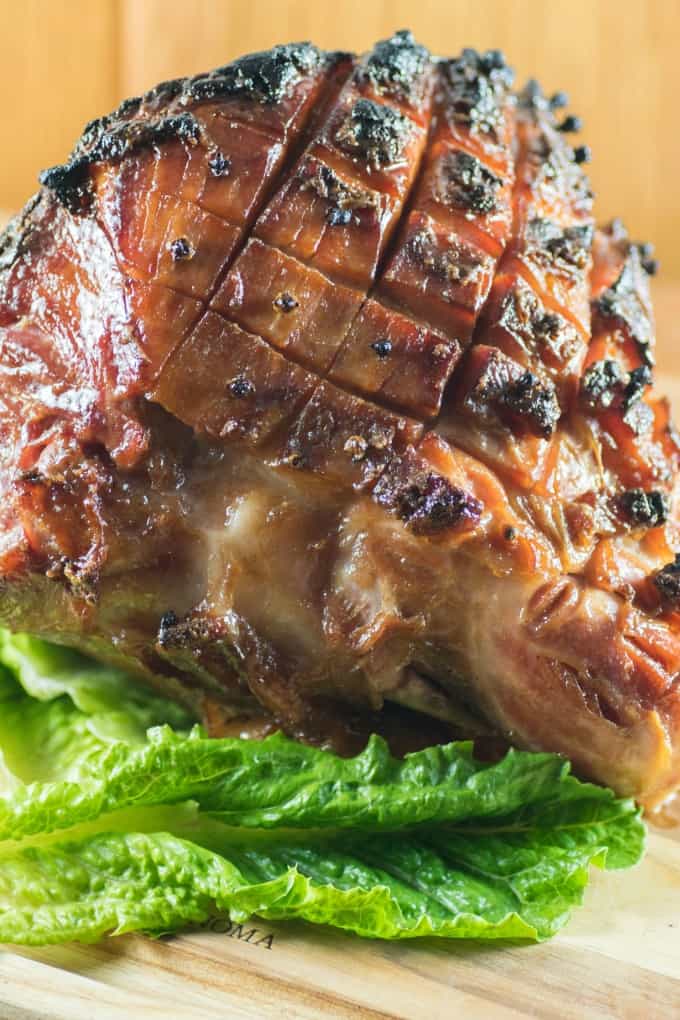 A succulent moist ham is waiting for you this holiday season. Just follow our easy recipe for the best results. 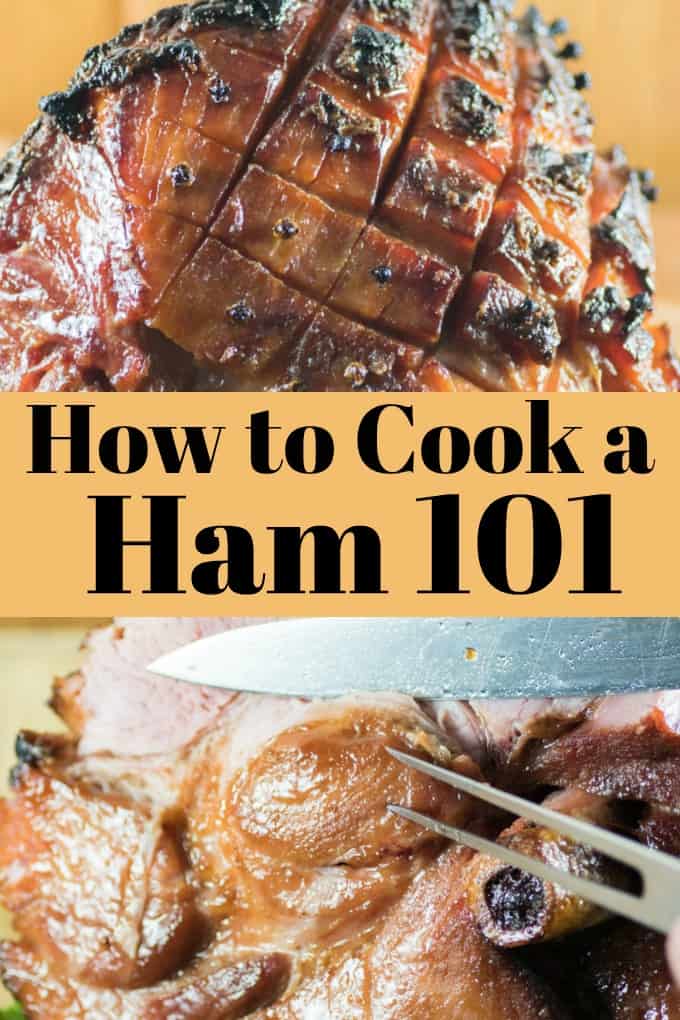 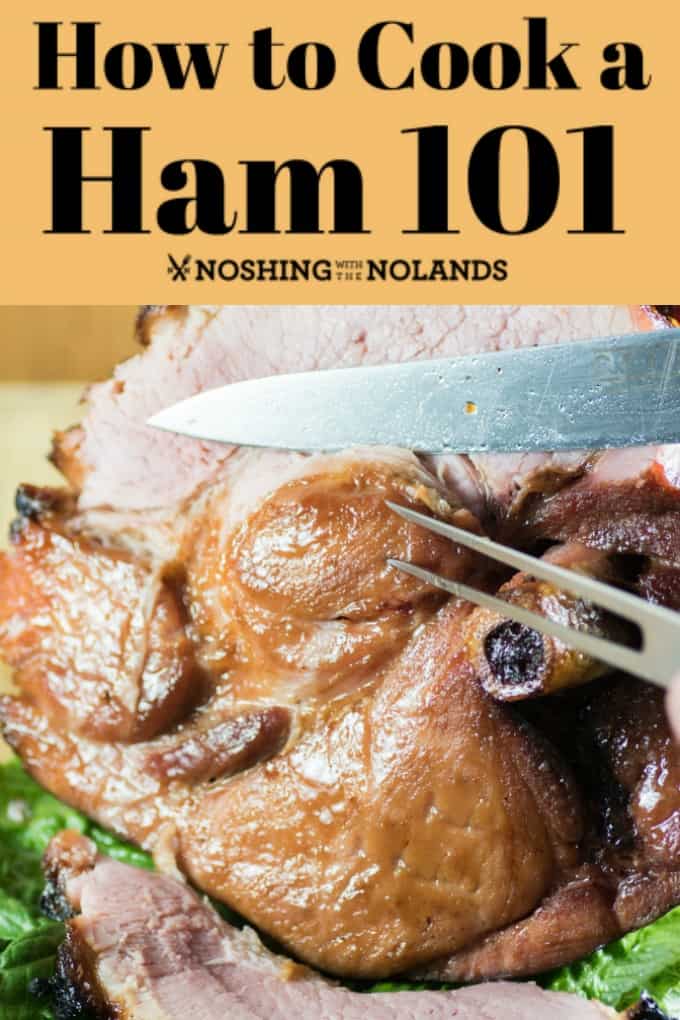